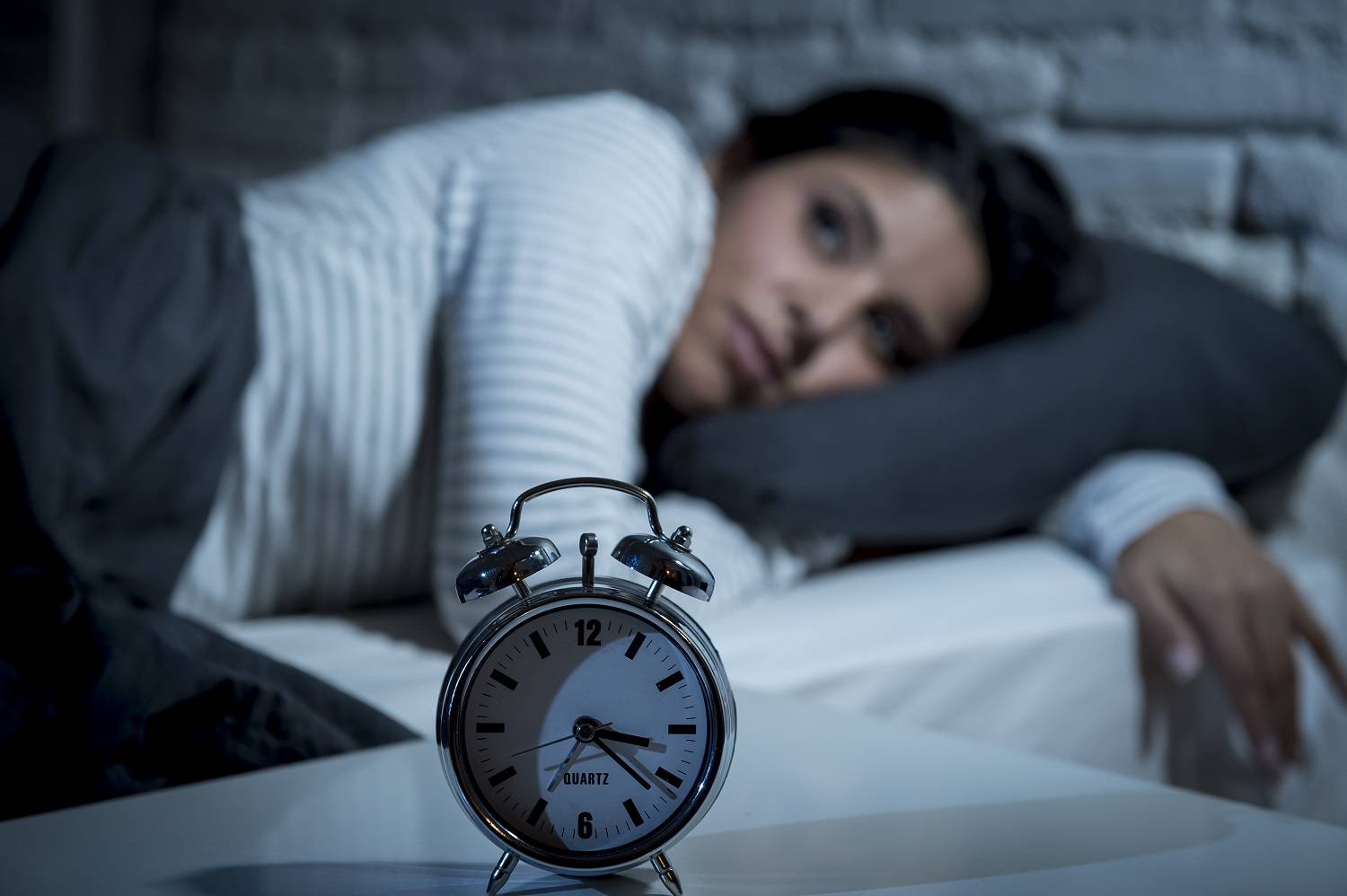 “About 97% of us need 7+ hours of sleep for optimal health and performance. Don't kid yourself into thinking you are a genetic short sleeper as a way to justify your poor habits. You are only hurting yourself. ”

The first thing that we need to establish, is that very few humans are able to optimally, or even healthfully function on chronic suboptimal sleep.

When discussing sleep and sleep hygiene with clients, or with my followers on social media, there are a number of people who insist that they feel great and function optimally on less than 6 hours of sleep,

No doubt, subjective feelings of well being are important; we all want to feel good day to day as we navigate life. With that said, how you feel is just that, subjective. It is important to step back and realize the severe limitations of basing what we do in regards to health around the subjective criteria of how we feel.

For an example of why this type of measure is so limited, you may routinely set an alarm and wake up at the same time each day for work. Doing so may put you at an average time slept of 6 hours. Certainly you can function well on 6 hours of sleep, millions of people do it every day. They exercise, advance careers, raise families and otherwise go about being successful on whatever amount of sleep it is that they get.

At this point, it is important to acknowledge that there is a subset of the population that seems to function completely normally on very short sleep.

But before you anoint yourself as one of the blessed few, you should know that very, very few people have the so called "short sleep gene" mutations required to be a healthy short sleeper. (1) Researchers estimate that genetic short sleepers make up less than 3 percent of the population, yet according to CDC data, about 21 percent of U.S. adults usually sleep 6 hours or less in a 24 hour period. (2)

If we subtract healthy short sleepers, that leaves 18% of the adult US population living in a chronic state of insufficient sleep. It is well established that insufficient sleep is associated with higher rates of the ten most common chronic diseases in the US.  The following table shows CDC data comparing chronic disease rates of those who slept less than 7 hours per night to those who slept 7 or more hours. 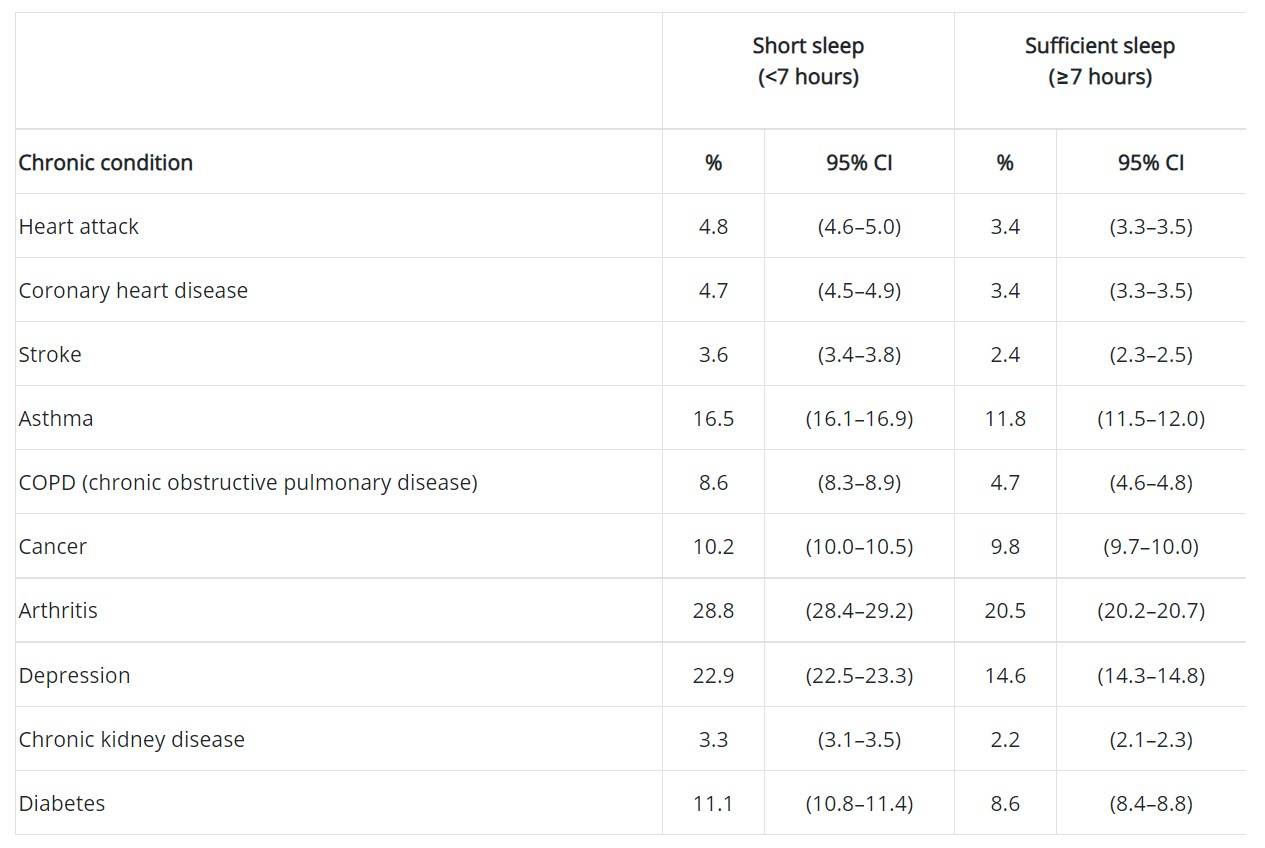 Correlation does not equal causation, so we can't say that short sleep plays a causal role in the increased rates of the above disease states.

That said, my primary goal, and I assume yours as well, is to optimize lifestyle to reduce risk of onset of disease. Getting sufficient/optimal sleep is one way to do just that.

After all, it makes little sense to have a great physique while simultaneously being in poor health. Obviously, there is overlap between looking healthy and being healthy, but the two are not synonymous, and you can certainly build a great body in an unhealthy manner. You will notice that throughout my content I always place optimal health first, and performance or aesthetic based goals second.

Now lets look at sleep as it relates to being lean and strong.

We all have biases, and I am no exception. I have long believed that sleep is an important variable to optimize in relation to improving both athletic performance and body composition, and I didn't come to that conclusion as the result of interpreting research. I came to this conclusion from my own training logs and through noticing how my performance in regards to strength progression and recovery from exercise are enhanced when my sleep is good. It is always nice when the research on a topic works to provide evidence in favor of that which is intuitive, in this case that optimal sleep improves performance and body composition.  But it is important to confirm that what seems intuitive does in fact line up with what the body of research suggests. If we fail to do this, we end up following intuition right into the land of wasted effort, or even worse, lost gains. This is where old, inaccurate tropes that simply won't die such as "lift light weight for high reps to get cut and lift heavy weight for fewer reps to get big". This is terrible advice, but that's for another article.

Early in 2020, a study was published that I was excited about. This was a randomized, controlled  trial that looked at the effects of sleep health education on body composition changes after 10 weeks of resistance exercise.

30 untrained subjects were randomized into two groups, with each group performing a 10 week resistance training protocol. One group was educated on sleep health optimization, focusing on how to improve both sleep quality and quantity, while the other group was not.

The reason I chose this study is the fact that simply educating the subjects on sleep health and how to optimize sleep produced a significant outcome with regards to fat loss. This is as practical as it gets, and gives me hope that my time spent educating you will produce meaningful positive change in your health.

I would like to have seen this study carried out for longer than 10 weeks, and with a larger sample size, however, the results of the study are in line with the growing body of evidence which suggests that sleep meaningfully impacts our performance and body composition.

"Sleep curtailment decreased the proportion of weight lost as fat by 55% (1.4 vs. 0.6 kg with 8.5 vs. 5.5 hours of sleep opportunity, respectively; P = 0.043) and increased the loss of fat-free body mass by 60% (1.5 vs. 2.4 kg; P = 0.002). This was accompanied by markers of enhanced neuroendocrine adaptation to caloric restriction, increased hunger, and a shift in relative substrate utilization toward oxidation of less fat."

Pay close attention to this sentence "enhanced neuroendocrine adaptation to caloric restriction". Short sleep quite literally speeds the bodies adaptation to an energy deficit, increases appetite, and causes you to oxidize/burn less fat!

Sleep, and it's relation to health, are a rapidly growing area of study. As more data are published, I think you will find a much more concrete picture of just how foundational optimal sleep is to optimal health. After all. Mother Nature did not selected for our species to thrive on short sleep, which says a great deal about its importance, considering it is our most vulnerable and unproductive state.

So, unless you know beyond doubt that you are a genetic short sleeper, make it a point to get adequate, high quality sleep on a daily basis. Your physique will thank you for it.

If you've been struggling to lose weight, and you aren't getting optimal sleep, you now know what to address to potentially get the needle moving again.

I will have much more on sleep and health to come, so if you have questions, please reach out and ask, it helps me know what to create content on.

Back to Sleep & Recovery